Living in Woodford has tremendous benefits. We have the convenience of Stockport and Manchester close at hand but are well connected to the rolling farmlands of North East Cheshire and the Derbyshire hills. This gives plenty of opportunity for wildlife to come visiting.

The idea of this page is therefore to provide an opportunity for those of us around Woodford to share observations, photos and comments on the natural world and wildlife around us.

Hopefully through shared experiences we will improve our enjoyment and understanding of our local environment whilst protecting it for future generations.

To start it off I have selected a few of my own observations and photos to illustrate the ordinary, the surprising and even the cute. However, this is just to encourage you to send in your photos, comments observations and even questions. 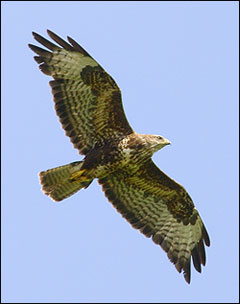 One of the largest and most magnificent of the local bird residents is the Common Buzzard. It isn’t the biggest we see around here, that honour easily goes to the significantly larger Grey Heron. The Buzzard, however, a beautiful sight soaring effortlessly on thermals in a clear sky.

Ten years ago sighting a buzzard in Woodford would have been very unusual.

Since then they have made a dramatic comeback, with at least three breeding pairs sharing the skies around Woodford.

As the warmer days of early spring come we can look forward to the carefree aerobatic antics of displaying pairs, full of the joys of spring! 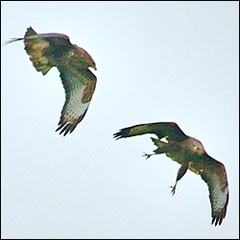 Now for the surprising – around Christmas two years ago, this character came visiting the garden, a Rose-ringed Parakeet, also known as the Ring-necked Parakeet. It’s the only feral parrot in Europe, originally thought to have escaped from captivity.

There are now quite large and noisy populations across Europe from Barcelona to Richmond in the UK. Sightings have been reported in Greater Manchester over the years, but this is the first time I have seen them in Woodford.

Both a male and a female were seen - the photo is of a female (no neck ring) - and they visited our feeders for some three months, usually arriving and departing towards Bridle Road, so perhaps they had taken up residence around there. The male, in the company of two female parakeets and making a lot of noise, was last seen in springtime 2009. Has anyone seen them since? 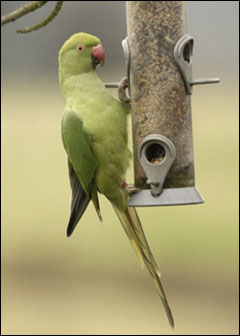 Perhaps not what we usually think about the squirrels visiting our gardens.

I rather like this one enjoying a plum from our neighbour’s tree.

Usually I see them defeating my best efforts to keep them off the bird feeders.

If you have a photo showing either a squirrel failing to get to a feeder or even a gymnastic squirrel beating all odds to get there then send it in and I will post it for all to see. 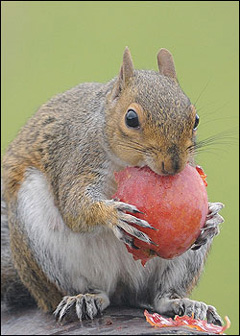 Finally, as one of the intrepid residents participating in the Litter Day last November, I spotted these fungi in the grass verges along Chester Road.

The Fly Agaric with its distinctive red with white spots I recognise but I’m not sure about the others – Any ideas?

Just a few photos and observations from me to start off and hopefully inspire you to participate and send in yours.

Please mark your contributions ‘Wildlife’ and e-mail to info@woodfordcommunity.co.uk

Volunteers on the Woodford Neighbourhood Forum conducted a comprehensive survey of the natural features and wildlife habitats in Woodford. You can view the report here Woodford Landscape and Environment Study. This helped to inform a survey conducted by Cheshire Wildlife Trust, which you can view here Protecting and Enhancing Woodford’s Natural Environment